In 2011 Latoya Ammons and her family moved in to a small house in Gary, IN.  What happened next would turn into one of the most documented cases of demonic possession in history.  The Ammons moved out of the house in the Spring of 2012 after just a few short months of living in the house. Latoya ended up having 3 separate exorcisms performed on her, one of which went viral. The house became known as a Portal to Hell.

This gained the attention of paranormal investigator Zak Bagans, better known from his Travel Channel show Ghost Adventures.  Bagans purchased the house over the phone, site unseen.  The next week he and a film crew went to Gary, Indiana to start filming.

Through out the document the question gets brought up a few times.  Was this all a hoax and just a way to earn some money and fame? At times, some of the people do seem to be very financially motivated, while others truly seem to be terrified and have legitimate experiences to talk about.  Bagans does a great job at separating out what is fact from what is fiction used for financial gain.

Since the documentary released, numerous people have reported strange happenings in their house or even in their dreams.  Immediately after watching it, our crew all began to hear strange knocking sounds through out an otherwise quite house. One of the strangest things that happened that night was the vision issue that we all started to 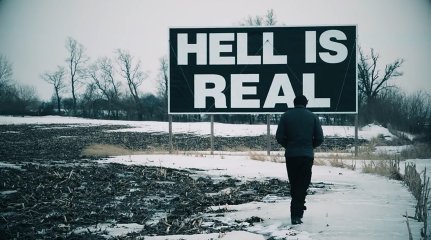 develop.  Which is very strange considering that it directly correlates to an experience that Zak has during the final moments of the film.  I ended up watching Demon House a second time, and that night I was fast asleep and I had an odd dream. It wasn’t even a nightmare, it was just a simple dream about picking a black dog up off the side of the road. I thought that it was a stray so I put it in my car and drove it to a shelter. When I got out of my car I went to the back to get the dog out. Upon opening, I quickly realized that the dog had died. I woke up out of a deep sleep in a panic. I was truly terrified. Since then I have not really experienced anything else.

Overall, the documentary is very well put together. The experiences that happened to Bagans, his crew, the experts that he brought in and several other people all lead to a very believable case of demons. The house may not be the so called Portal to Hell but something was definitely happening there. The facts and experiences far outweigh anything that could have been made up. Even if some of Latoya’s story was fabricated for fame and money, things happened in that house that caused real life-long issues for everyone involved. In all honesty, it is one of the best horror documentaries that I have ever seen.

Demon house is available on iTunes, VUDU, Amazon Video and all other major VOD sites.

All photo credits go to IMDB 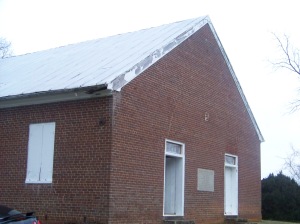 Constructed in 1835, Bethesda Presbyterian Church is a remnant of the Civil War’s effect on East Tennessee. As the war began, the congregation divided in two: many sided with the Confederacy, though many more still were Union sympathizers. During this period, the church closed its doors. The Battle of Bean Station took place on December 14, 1863. After this historic battle, Confederate General James Longstreet arrived at Bethesda Church with 25,000 men who were stationed on the land until February 1864. During this time, the church served as a hospital. In the cemetery just outside the church doors, over 80 unknown soldiers were buried in mass graves. While some Union soldiers were laid to rest here, most of the unknown dead are presumed to have fought for the Confederacy.

In October, Federal troops pushed closer to the encampment at Bethesda during an engagement 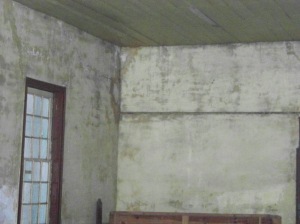 known as “Vaughn’s Stampede.” In November, Confederate troops pushed the Union soldiers back west towards Knoxville. This battle is known as “Gillem’s Stampede.” During this push, a cannonball smashed through the eastern wall and caused severe structural damage. The walls were quickly repaired and reinforced with iron bracings and rods that can be seen in the photo to the right. The original pulpit and high-backed pews remain to this day, and the floors lie permanently stained with the blood and disdain of our American predecessors.

As the war ended and soldiers from both sides began to return home, the congregation attempted to compromise and reconvene. Sporadic services dotted the calendars. Between 1866 and 1871, sympathizers of each cause sat in the outer pews, leaving the middle column empty. Eventually, one side left and helped form the First Presbyterian Church of Morristown. The remaining church body stayed through 1875. However, in time, the majority began attending the new Russellville Presbyterian Church. 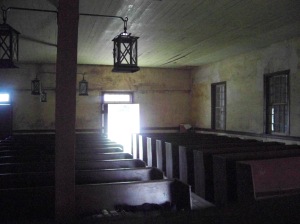 Bethesda has remained closed since that time, save for a few irregular services held for major Christian holidays such as Easter. Now the building stands to serve as a reminder of the sacrifice of our ancestors in East Tennessee. Within its walls and grounds lies the story of a church body that symbolized the civil issues of the time. This once-unified group of people was just another casualty of a war among brothers.

As for potential paranormal activity, many have claimed to see apparitions of restless Confederate soldiers both inside and outside the church. The apparition of a weeping woman has also been seen on the far side of the cemetery. Her cries are often heard late at night. We have also heard reports of a “witch” buried on the grounds near the woods.

We investigated Bethesda Church and the surrounding grounds this past Sunday evening. Check back soon to see what we found!

There are actually several reasons for investigating in the dark.

Humans’ other senses are heightened when sight is diminished.

This is a scientific fact. Our eyes do adjust somewhat to low-light situations, but our hearing, sense of smell, and all other sensory devices at our disposal become more in-tune with our immediate surroundings. A seasoned investigator will recognize this, and will work diligently to debunk any strange happenings that occur without immediately writing them off as paranormal.

Less people are out and about at night.

This is important because this means less noise pollution from the surrounding population. When a haunted location resides in the middle of a downtown location that is bustling during normal work hours, but calm and quiet at night, you would definitely choose the latter time to investigate it. It makes the whole situation much easier to decipher the paranormal from the explainable.

Many paranormal investigators have day jobs, too.

Sadly, this is just the reality. Investigating the paranormal would ideally be my full-time job, but for many in this passionate community, it is only a fun hobby. Thus, we work during the day and, when we have time, we investigate at night!

habitually at a certain time of day.

This is true at night as well. Residual haunts may involve an event, such as a murder or accidental death, that occurred at a specific time of day. These events replay over and over, at or near the same exact time every day (or night), and could be the reason for a team of researchers to choose to visit a location at that time.

Honestly, it does increase the thrill of doing the live investigations in these locations.

As lovers of the spiritual realm, many of us do also enjoy a good scare every now and then. It’s one thing to watch a scary movie about ghosts in the dark, but it’s another altogether to live through a paranormal experience! The thrill of prowling around in the dark and happening upon these experiences is second to none.